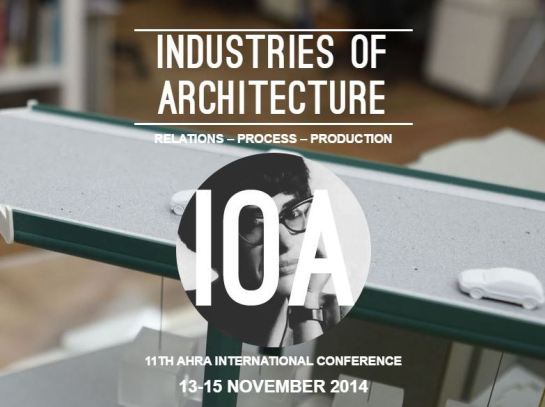 ‘All too often architectural theorists, historians and designers side-line the industrial, technical and socio-economic contexts in which building is constituted or maintain that these are not the proper concerns of architecture, even when acknowledging the limits and possibilities set for architecture’s production in advanced capitalism.’ – This quote is taken from the opening synopsis for the conference organised by the Architectural Humanities Research Association and outlines the parameters for the submission of papers.

I have spent much of the last six months researching current ideas, positions and concerns within architectural theory and this conference was an ideal opportunity to gauge the state of the arguments within this synopsis. The conference itself was an exciting, engaging and exhausting event (and I wasn’t even giving a paper!). I met a number of people working in or researching fields that felt relevant to my own and I have been left with many notes, email addresses and book references to follow up.

I chose to spend much of my time listening to the presentations and discussions within the symposium room labelled ‘politics’, where several speakers were concerned with critiqueing the state of architectural practice from a Marxist position. Many believed the future of the ‘architect’ (building designer) lay in a much more integrated role within the labour process. My overall impression was that the architectural humanities are only too aware of what seems to be regarded as a widespread crisis concerning the changing role and limited future for architectural practice more generally. When giving the closing keynote address Adrian Forty (Bartlett School of Architecture) believed that, ‘historically, the role of the architect had been synonomous with that of the innovator’, if the architect is disappearing who will become the innovator? – maybe ‘The User’?